We all have our own favorite nativity sets, but as I’ve been learning, different parts of the world have different traditions when it comes to creating and displaying their nativities. Every region of the world has added their own cultural flair to them, such as figurines in African nativities looking more like various tribe members, but some traditions go above and beyond what we would consider just fitting in.

Nativities That Go Against the Grain

France – Nativities Include Everyone 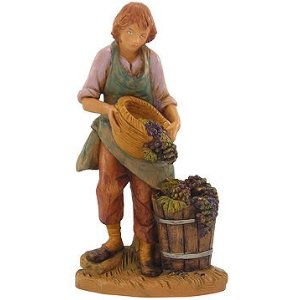 This is probably the most mundane of the lot, so I’ll mention it first.

After the French Revolution, people in parts of France began adding common folk to their nativities.  These new additions were villagers and tradesmen, such as bakers, farmers and carpenters.

The idea was that the Christmas Story might become more relevant to the general public if there were characters added in that they could relate to. Some manufacturers of nativity sets, such as Fontanini, go to great lengths to add these types of figurines to their collections. 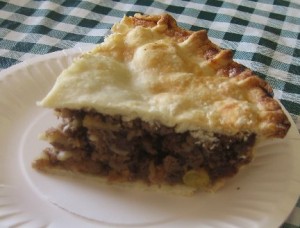 Now where is Jesus going to sleep?

Before it was banned outright in the 17th century by religious leaders at the time, tradition was to bake a mince pie in the shape of a manger for baby Jesus to rest.  The pie was then enjoyed as part of the traditional Christmas meal. The reason it was banned?  Officially, the practice was condemned as “Idolaterie in crust.”

I have a hard time with the idea of idolizing mince pie.  If they made a manger out of pizza, I might need to make a confession or two..

Catalonia, Spain – Watch Where You Step 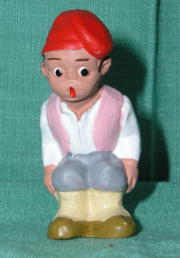 I love this one. It is very common to see a character called the ‘caganer’ is often added to the nativity set in this region.

Caganer translates somewhat to mean ‘he who chooses not to use the facilities.’ And, as you would imagine, he is usually found hiding somewhere with his pants down and squatting!

Sounds gross, but for superstitious Catalans, he’s actually a bit of a hero – he is a symbol of fertility and good fortune.

Farmers who don’t display him won’t have a good harvest. He is also described as having the ability to remind us that when it comes down to it, we’re all equal, regardless of status or wealth. While I really appreciate the message he brings, I’m not sure I could bring him into one of my nativities.

Mexico – Sun and a Serenade 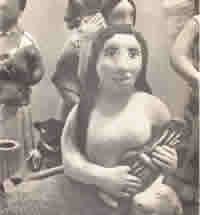 Did she bring a fish?

Another bit of an oddity – besides seeing blue skies, flowers and sunshine in many descriptive nativities, there is a rumor that it isn’t unusual to find a Mermaid with a guitar mixed in with other nativity figurines in some parts of Mexico.  It’s not substantiated, but I did run across a paper discussing it from the early eighties.

A Mermaid! But there is more: she is accompanied by a four piece band who all represent members of the community – complete with animal heads. I’m not quite sure what the animal heads themselves represent – or why they are in a band, but it certainly is a unique addition to the traditional nativity scene!

In Paraguay, Nativity scenes are believed to protect homes and families from harm. Before Christmas falls, they take a large board and put a hunk of moist dirt on it, and plant rice seeds in it, which are intended to sprout.  They then arrange their nativity figurines on top of it.

I hope you enjoyed my strange little take on odd nativity scene traditions. It just goes to show you how unique and culturally educational nativities can be!

You can also learn more about Setting Up a Nativity, which includes ideas for children, as well as which nativity set is my favorite.

We use cookies to ensure that we give you the best experience on our website. If you continue to use this site we will assume that you are happy with it.Ok